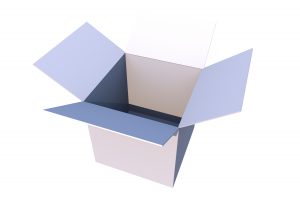 Clutter is a problem in a lot of American households. For some reason, we get attached to things to the point of not wanting to dispose of them – even when they are no longer being used. Would you believe that a simple box can be a helpful tool for preventing future clutter? It can be. Keep reading if you want to know more.

The Story of Anna Marie

Anna Marie is a married mother of three grown children who, in her own childhood, struggled with the idea of throwing things away. She was one of two children living in a house originally built for a family of 10. Her bedroom was large enough to have accommodated four girls before her family moved in. That meant she had plenty of space for collecting and storing her stuff. And that is exactly what she did.

As a middle-aged woman now, Anna Maria recounts stories of being sent to her room by her parents and instructed to clean up and clean out. She struggled mightily, mainly because she didn’t know where to start. By the time Anna Marie got married and moved out, every inch of storage space in her room was full.

Everything was fine for Anna Marie and her new husband for the first few years. But then they discovered that having children meant bringing more things in the house. Anna Maria was determined that her children would not follow in her footsteps; they would learn to control their possessions rather than letting their possessions control them.

What did she do? She came up with an ingenious solution utilizing a simple cardboard box. The solution was based on something Anna Marie realized she never had growing up: limits.

It Must Fit in the Box

One of the reasons Anna Marie never disposed of anything as a child is because her parents never placed any limits on her. Even as her built-in storage space filled up, her room was big enough to add dressers, cabinets, and other storage solutions. Anna Marie recognized this as being a problem when she had her own children.

The box solution was a simple one. When it came time for one of her children to clean up and clean out, she presented the child with a cardboard box and the following instructions: you must go through all your possessions to decide what you want to keep, what can be thrown away, and what can be donated. Everything you decide to keep must fit inside this cardboard box. If it won’t fit, it must be thrown away or donated.

Anna Marie made it clear that the child only had enough room to store that one box. The child in question was allowed to automatically keep things that were openly displayed in the room (think pictures, stuffed animals, small toys, etc.) as the box only applied to items that were under the bed or in the closet. By limiting storage space to the cardboard box, Anna Marie gave her children limits. Those limits helped them make wise decisions about what should be kept and what should be disposed of.

Give It a Try

Anna Marie’s solution is not appropriate for every person and every circumstance. But for people who struggle with clutter because they’ve never had any limits placed on them, a cardboard box can prove to be very helpful. The box places a clearly defined limit around what can be saved, giving a person a starting point for cleaning up and cleaning out.

If you have a problem with clutter, give the cardboard box a try. The worst that can happen is that it doesn’t work. If it does work, you could be on your way to a clutter-free life.