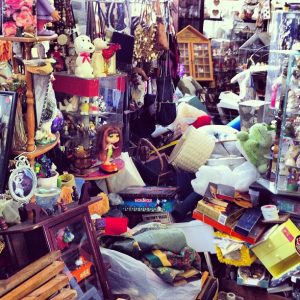 My Divine Concierge has had plenty of opportunities to help families trying to resolve hoarding situations. We know firsthand how difficult the disorder can be. We also know that there are people who exhibit some of the same difficulties with clutter without suffering from hoarding disorder. That led us to wonder why.

For the record, a genuine hoarding disorder is a complex disorder requiring the help of a mental health professional. My Divine Concierge can only help in the physical process of cleaning up and clearing out. As far as that goes, why is it that some people seem to have trouble throwing things away? Even among those who do not hoard, an inability to get rid of unneeded possessions produces clutter.

Is It OCD or Depression?

A decade ago, it was common for the mental health community to consider hoarding as a manifestation of obsessive-compulsive disorder (OCD) or depression. It was treated as such. But a number of studies have since shed new light on the disorder. One such study, published in 2012, showed that hoarding does not overlap with OCD or depression as frequently as once thought. It appears to be its own separate issue on many levels.

The study was carried out by researchers at the Institute of Living in Connecticut. Researchers conducted brain scans on three groups of people for the study: 43 people who had already been diagnosed with hoarding and disorder, 31 people with diagnosed OCD and 33 healthy adults without a diagnosis of either. To make a long story short, they discovered that brain activity among the hoarders was dramatically different.

Brain scans conducted while presenting patients with mail and junk paper clearly showed a couple of important things. First, when it came to the actual volume of ‘junk’ the hoarders were exposed to, there was very little unusual brain activity to note. But when hoarders were asked to make a decision about whether to keep a piece of junk or get rid of it, their brains seem to go into overdrive.

By comparing these brain scans with those of the other two groups under similar circumstances, they found that the trouble the hoarding group was having was less about any special attachment to the junk and more an inability to make a decision. They ruled out the attachment question by presenting patients with their own junk as well as junk collected from the Institute itself. Patients demonstrated an equal level of difficulty making decisions across both.

Look at Other Areas of Life

The point of this post is not to say that hoarding resolution is as simple as learning to make decisions. Indeed, the disorder is a lot more complex. The point is this: you may have trouble with clutter in your home even though you have not been diagnosed with hoarding disorder. If so, it is possible that the root of your problem is an inability to make decisions about your belongings. It is nothing to be ashamed of. It’s also nothing to run away from. Nobody is perfect. We all have challenges that have to be overcome.

One of the things we do in helping people declutter is assist them in making decisions. We help them analyze what needs to be kept, what needs to be disposed of, and what needs to be stored. And we do so by looking at things from a logical perspective that deals with the pros and cons of every possible decision. We have found that often, this is all clients need to get started down the decision-making road. And once they get going, there is no stopping them.

If you have a problem with clutter, consider that part of your difficulty might be linked to decision-making processes. My Divine Concierge can come to your home and help you start making the decisions necessary to get your place uncluttered. It might be that you just need to jump-start the process by making a couple of key decisions and then going from there.